A Post by the Founder of Temple of Fortuna dot com

A little more than 17-1/2 years ago, this little dog came into my life. 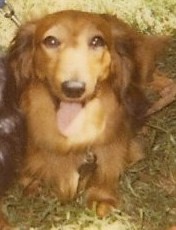 He was born in the day of Fors Fortuna, June 24. If it had not been for this little dog, I may never have heard of the Goddess Fortuna, I may never have written a book, and there may have been no such thing as Temple of Fortuna dot com in the 21st century.

Although he was separated from me at an early age, not entirely through fault of mine nor of his, his brother, his mom and I remembered him through the work I continue ... to this day ... on Sunday mornings; a work which has been supported not only by my family, but also by those who have contributed and stayed with us in whatever way through all these years.

He was, in his way, a hero. I didn't know he was, when one day we showed up in the rain for the final exam in a canine agility class we took for fun, and he won a trophy merely because he was able to remember and perform all the agility tasks to completion ... despite being short-legged ... simply because the more competitive students thought the event had been rained out and they stayed home.

I didn't know he was when, one day, he disappeared from our yard and never returned until I discovered his mother had been shipped off to a rescue organization a few days earlier and I was able to bring her home to live with us instead of having an insecure future as an elderly female past her prime. In his way, he may have saved his mom's life.

It is my hope he had a nice life and, if there were moments of regret or unpleasantness, that those moments are forgotten in the history of time and the afterlife.

He was born over 17-1/2 years ago. His brother lived until last spring, and passed at the age of 17-1/2. It is my belief that, regardless of what happened since we parted ways, he has finally lived out his natural life.

This post is made in memory of a hero. A small, ten pound dog who somehow heard his mother's cries and went on a search outside of domesticity for her rescue. His mom lived to be over 16 years old, and most of her life she spent with one of her sons and myself, as a retiree.

I encourage everyone who has a dog, to seriously consider adopting their dog's parents when they are ready for retirement. It is a richly rewarding experience.

In memory of Solstice ("Longwalker", according to the Pagan News name-generating app) ... who also went by the name "Grr Grr" (which he could say himself, much as his brother "Woof" could say his own name) I link the Fors Fortuna podcast created years ago, when we still believed he would somehow drop in and visit us again. Peace be to you, your furry and non-furry families and friends.