The Cella of Fortuna Huiusque Diei

The Goddess of Good Luck in the Present Day

This cella was initially proposed in the style of a shrine, after review of a first year Wicca program and mentoring offered by Correllian Educational Ministries was completed by Temple of Fortuna dot com President, E.S. Simpson. The cella is intended to open the door to learning and acceptance of acceptable, contemporary Neo-Pagan teachings offered via a variety of sources.

Several distinguished aspects of the Goddess Fortuna were discussed at an open Temple of Fortuna dot com board of directors meeting, as well as a new graphic for the shrine, and Fortuna Huiusque Diei (Fortune or Luck of the Present Day) was suggested by former board member Astanon Darastrix, and selected by majority vote for the naming of the shrine. 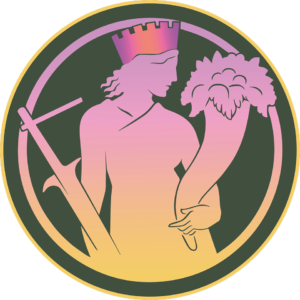 A new black and white Goddess Fortuna graphic was created by former board member and award-winning tarot artist, Robert Place. Colors were applied collaboratively by Pluma Argenti, of the Correllian Nativist Tradition, and E.S. Simpson, founder of Temple of Fortuna dot com. All of the participating artists permissioned Temple of Fortuna dot com to display this graphic.